Pakistan International Airlines is chartering aircraft with the crew from Maltese charter airline Hifly to resume its flights to the UK from Pakistan. These aircraft will be acquired on a charter basis and they will be utilised for mostly European flights. It is important to note that while this planing was shaping up PIA’s main competitor on the route British Airways announced to resume its flights from 14 August as well.

HiFly is a Portuguese charter airline headquartered in Lisbon. The airline was incorporated in 2005 and concluded its initial certification process in April 2006, when it was issued with an Air Operator Certificate by the Portugal civil aviation authority. It has 4 widebody aircraft including two brand new Airbus A330-900s, one Airbus A330-200s and one A340-300. It also has a subsidiary in Malta. PIA is using its Maltese Airbus A330-343.

On the other hand, British Airways has announced it will resume flight operations to Pakistan from the London Heathrow airport from 14 of August. The airline today said it would start direct flights three times a week to and from Heathrow Airport and Islamabad. The first flight will land in Islamabad on 14 August and will be taking extra precautionary measures for the safety of its crew and passengers. 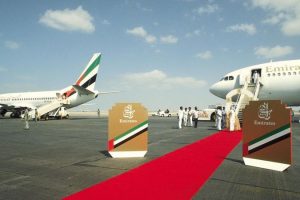 How did PIA help Emirates launch the service?

How did PIA help Emirates launch the service?