Pakistan International Airlines kept up its newly adopted practice of influencer marketing, the use of lifestyle, food and fashion bloggers to bolster its brand standing among potential customers on the inaugural flight to the New Islamabad International Airport. Flight PK-300 on the 1st of May 2018, marked the dawn of commercial operations to the much awaited, state of the art airport facility. The marketing and brand department of PIA, in a first of its kind move in Pakistan, recognized an integral part of Pakistan’s aviation blogging community, Pakistan Aviation and made us a part of the journey. We were privileged to experience first hand, this historic flight unfold and receive beautifully designed ‘Markhor’ inspired promotional merchandise, celebrating the iconic moment. 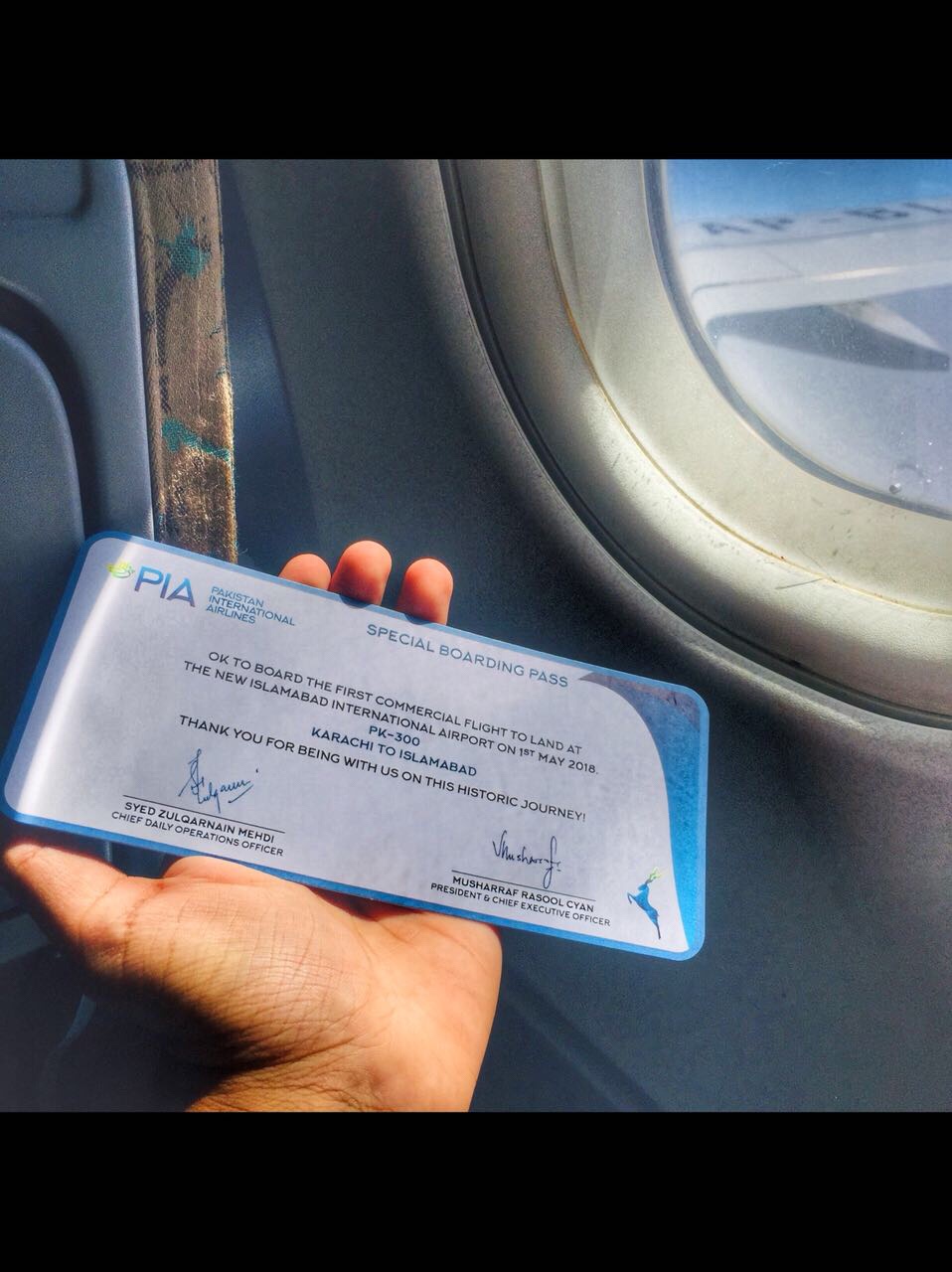 PK-300 is the first of the daily service in Pakistan International’s timetable, between the financial capital Karachi and the federal capital Islamabad, which departs Karachi at 0700 hours according to its schedule. However, the inaugural PK 300 flight was planned to depart at 0900 hours on the 1st of May 2018 and scheduled to land at its destination at 1045 hours. Were allowed to board the plane earlier than the other passengers, in order to be able to document the pre-flight preparations. The equipment on the day was PIA’s workhorse fleet member, Airbus A320-200, registration AP-BLB piloted by veteran Captain Farrukh Mirza and First Officer Zuhair Ilyas. Perfectly on time, the aircraft took off at 0915 hours from runway 25L at Karachi, and after a flight time of 1 hour 45 minutes, which excludes the 15 to 20 minutes holding time prior to landing at the new airport, touched down after approximately 11.15 hours local time. As the plane slowed down after touch down, it was no secret that the new airport is situated as such that it is faced by breathtaking scenery comprising of lush green mountains which directly face the terminal waiting areas. A treat for the eyes of passengers who will be waiting for their flights in the days to come.

In order to give a short tour to the first set of souls to use the new airport, the aircraft was marshalled into the international terminal’s gate. PIA’s CEO, Dr Musharraf Rasool Cyan and other executives, including Bilal Munir Sheikh came onboard to personally greet the passengers. Members of the brand department, including the head of Brands Mr Abdullah H Khan, were also present. It seemed like an ordinary experience walking out of the aircraft into the glass bridges, very similar to the ones in Karachi. The aircraft was parked on stand 5, the location of that very stand is such that the view from its jetbridge towards the left, from the scratchless and pristine blue tinted pane of the jetty, is of that part of the terminal building which boasts the titles of ‘ISLAMABAD INTERNATIONAL AIRPORT’ in English and Urdu. The wording in white stand out from the fancy gray a colored architecture, which is characterized by numerous white pillar-like structures which nearly run the entire length of the building, from its roof to the end of the bridges vertically, as well as horizontally, albeit the horizontal lines have small breaks between them to add some degree of fanciness to the look of the building. As we step out of the jetty and make our way into the terminal building, the atmosphere which greets you is remarkably and positively different from all the other major airports of the country. Unlike Karachi’s Jinnah International Airport which was the largest airport in the country, prior to NIIAP’s opening, the New Islamabad International Airport’s interior has been designed with white floor tiles and bright white and yellow LED lights. It is no secret that the lighting and ambiance of a place, play a significant role in influencing a person’s mood, and the designers of the new airport, have successfully embedded that thought in their design, and implemented it for the benefit of the passengers who will be using this facility for years to come. 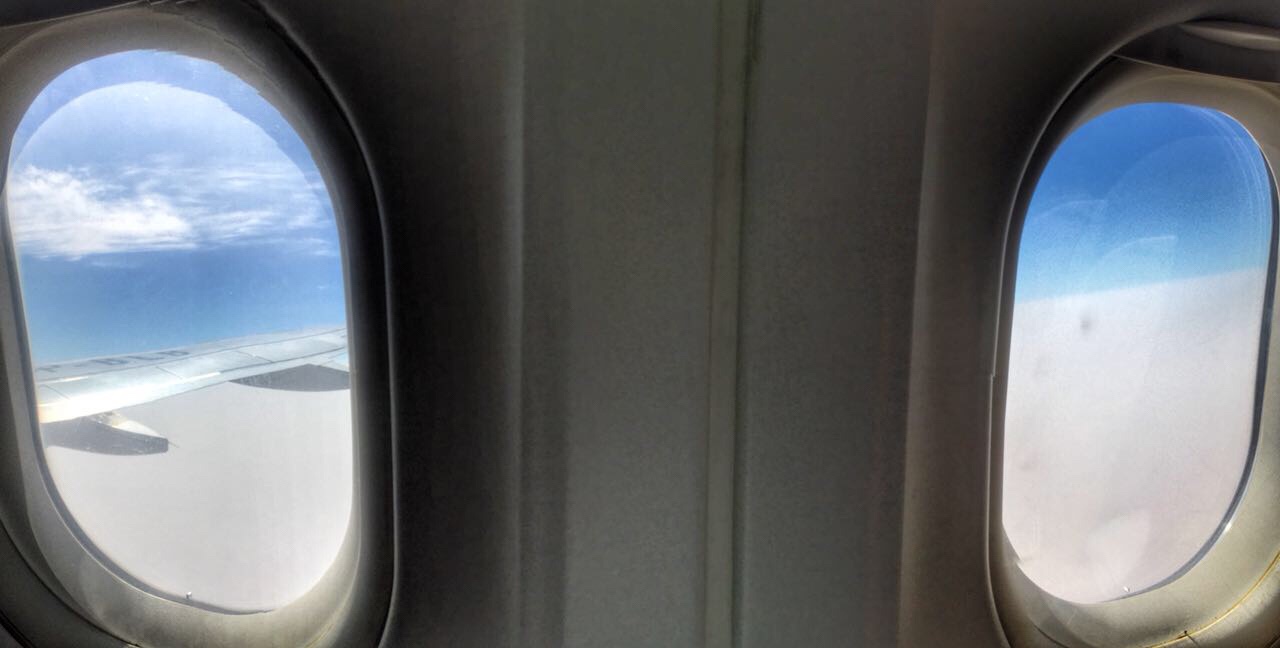 In a sharp difference to the old, Benazir Bhutto International Airport, any passenger stepping foot for the first time will not fail to immediately recognize the vast amount of space he has to breathe and to move. This is a noteworthy aspect the new airport has to offer, as the old BBIAP was very congested even on a good day. Furthermore like all public places, cleanliness and functionality of the restrooms are imperative for user comfort and the terminal toilets in NIIAP were no different. As it was only the first day of the airport in operation, it is premature to comment on the quality of fittings and the functionality. Nevertheless keeping the visuals in mind, the restrooms are easily comparable to airports like New York’s JFK and Manchester’s Ringway International. As the bloggers, made their way to the baggage belts, the corridors with transparent glass on either side, wore a beautiful look. Upon looking carefully, we noticed that there were spots behind the glass which have a crucial feature, to boost passenger comfort, and something which can not be seen in any of the airport’s of Pakistan currently, reclining seats which, a highlight feature for the anxious and exhausted passengers experiencing flight delays, due to poor weather conditions or any other reasons. Taking the escalator to the lower level, which houses the baggage claim area, anyone would be left with a dropped jaw, as the view from the escalator descending, is that of a collossal hall with numerous, spotless pillars and yet another spot in the terminal, which is characterized by bright lighting, beaming floor tiles, perfect symmetry and bold glass work in all four directions you look towards. And that truck art showcases the bright side of our culture that is celebrated all over the world.

As this was a domestic flight, we could not experience the immigration or customs counters, but first-hand accounts of people testify that the process is considerably quicker than the old airport, as well as other major international airports of Pakistan.   The moment we step out after receiving our luggage, the airport’s construction and layout continue to impress us and proves to us, that the New Islamabad International Airport has set a high precedent for other in the country to follow. Huge efforts and an unwavering political will were required to bring the other airports in the country on par with the level of this facility. Among the impressive features which can be viewed by people coming to drop off their loved ones, is the Visitor’s Gallery. The Visitor’s Gallery is said to have airside restaurants, and shops. That part of the terminal is currently under works, but we are optimistic that this particular aspect of NIIAP, will push the already high precedent set to an even unattainable level for other airports, possibly making NIIAP’s passenger experience the best in the country.