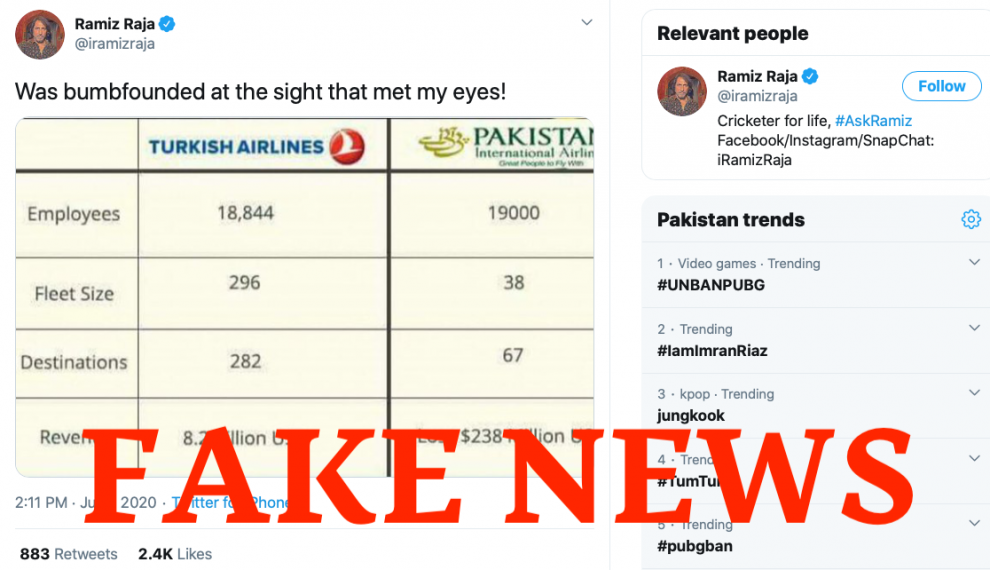 Former Pakistani Cricketer and commentator Ramiz Raja shared a screenshot that mostly surfaces whenever PIA is in news. Last time it was PMLN Khawaja Asif who shared similar screenshot without verification and this time Ramiz Raja was fooled by the same scam. The screenshot is factually incorrect as it makes a comparison between Turkish Airlines and Pakistan International Airlines. We are worried about how he got bumbfounded. Here is the link of the Turkish Airlines website where there is a breakdown provided.
https://www.turkishairlines.com/de-de/press-room/about-us/turkish-airlines-in-numbers/

On the other hand, Turkish Airlines has 306 planes in its fleet, and out of those 84 are currently inactive. Turkish Airlines had 66000 employees according to an interview by its chairman İlker Aycı to CNN Turk on 17 March 2019. In the same interview, İlker Aycı said that the airline will offer employment to 8,000 people in 2019. His exact quote reported by the Turkish newspaper Hurriyat Daily states “Turkish Airlines is a family with 60,000 members and we are celebrating our 86th anniversary. We will employ about 1,150 new chief pilots as well as 2,300 people as cabin crew. We are planning to employ more than 8,000 people in 2019. Our family of 60,000 will become 68, 000,”.

We are aware of reports that the Turkish Airlines investor relations document puts the number of employees at 35,275 as of 2018. And Wikipedia has carried the same document as a source. But when inspect the document we find out that as of 31.12.2018 Turkish Airlines, Turkish Technic and Turkish Airlines Aydın Çıldır flight academy total staff are 35.275. And on the basis of this we tend to believe that the number given by İlker Aycı, who is chairman of airline is right.

It is also very interesting that people are defending Ramiz Raja tweet on the basis of 35.275 which in fact proves his tweet wrong too. Because definitely the number 35.275 is much higher than the number 18844 provided by the fooled cricket commentator. And the number of aircraft is again wrong even from this standard as well as other numbers provided by the commentator.