The letter available with Pakistan Aviation raises 7 points with reference to the story and asks Dawn to “publish this letter in the newspaper, under the Letters to the Editor section.” The story is not only full of lies and fabricated information but also a simple google search could have proven the assertions made by the reporter wrong. But it seems Dawn’s high editorial standards can be manipulated for such reports.

1. I write to you in response to your article titled “AGP recommends immediate sacking of PIA’s chief” published on 26th August 2018. 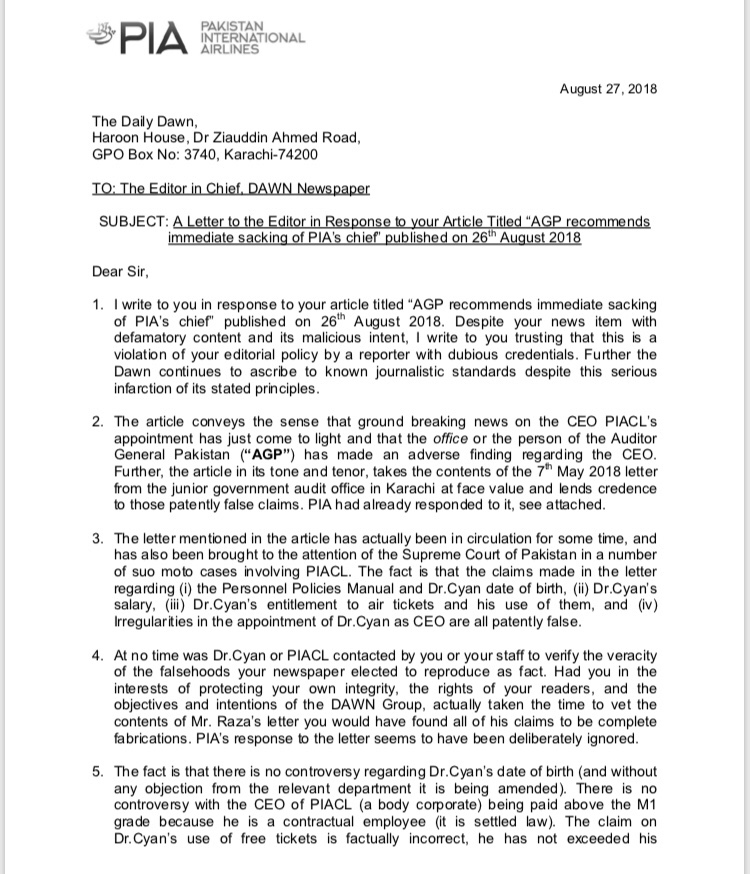 2. The article conveys the sense that ground breaking news on the CEO PIACL’s appointment has just come to light and that the office or the person of the Auditor General Pakistan (“AGP”) has made an adverse finding regarding the CEO. Further, the article in its tone and tenor, takes the contents of the 7th May 2018 letter from the AGP’s office at face value and lends credence to those patently false claims.

3. The letter mentioned in the article has actually been in circulation for sometime, and has also been brought to the attention of the Supreme Court of Pakistan in a number of suo moto cases involving PIACL. The fact is that the claims made in the letter regarding (i) the Personnel Policies Manual and Dr.Cyan date of birth, (ii) Dr.Cyan’s salary, (iii) Dr.Cyan’s entitlement to air tickets and his use of them, and (iv) Irregularities in the appointment of Dr.Cyan as CEO are all patently false. 4. At no time was Dr.Cyan or PIACL contacted by you or your staff to verify the veracity of the falsehoods your newspaper elected to reproduce as fact. Had you in the interests of protecting your own integrity, the rights of your readers, and the objectives and intentions of the DAWN Group, actually taken the time to vet the contents of Mr Raza’s letter you would have found all of his claims to be complete fabrications.

5. The fact is that there is no controversy regarding Dr.Cyan’s date of birth (and without any objection from the relevant department it is being amended). There is no controversy with the CEO of PIACL (a body corporate) being paid above the M1 grade because he is a contractual employee (it is settled law). The claim on Dr.Cyan’s use of free tickets is factually incorrect, he has not exceeded his entitlement (in fact he has curtailed it as previously CEO’s received unlimited travel for family). Further, the issue of the process of his appointment is a matter sub judice in two quo warrantos which the court of Pakistan shall decide, and before such judgment is made no determination by you or anyone else is valid.

6. Furthermore, the fact is that neither the AGP himself nor his office has made any observations or conclusive determinations regarding Dr.Cyan’s appointment. The letter your article alluded to is speculative at best and does not even count as an ‘observation’ within the standard process for recording audit objections or audit paras by the AGP.

7. The media plays a key role in safeguarding democracy by propagating the truth. It would be a travesty if the media was instead subverted to serve the cause of a vested interest clinging to power, privilege, and its material gain. Despite, your letter’s defamatory content and its malicious intent, I write to you in the spirit of propagating the truth at a time when corrupt interests in PIACL are doing all they can to pervert the course of justice.

We believe PIA should have demanded the withdrawal of the story and disciplinary action against the reporter Bhagwandas and those who edited for this serious breach. It is pertinent that PIA should not allow any media outlet to exploit its reputation.