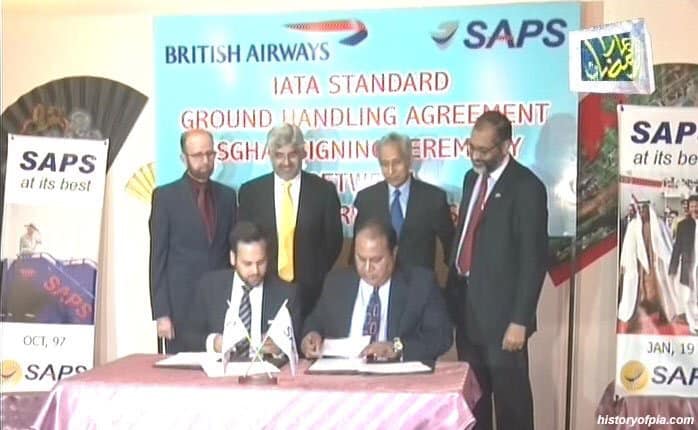 British Airways announced in December 2018 that it will restart flights between Islamabad and London from June 2019. A few days ago the airline formalised agreement with Shaheen Airport Services for IATA Standard Ground Handling Agreement. Shaheen Airport Services (SAPS) will handle ground services for British Airways at Islamabad International Airport.

On the other hand, British Airways has also signed an agreement with Sareena Islamabad hotel during their layover in Islamabad. It is learnt that Hashoo group was very keen to host BA crew at Marriot Islamabad but the contract went to Sareena. Initially, BA will operate three flights a week on Heathrow Islamabad route. Tickets are on sale from December with prices starting at £499, World Traveller, £773, World Traveller Plus and £1,799 for Club World return. BA will operate this route with a state-of-the-art three class Boeing 787 Dreamliner.

Robert William, Head of Sales for the Asia Pacific and the Middle East, said “it’s exciting to be flying between Islamabad and Heathrow. On the route, customers will enjoy the very best in flying. Not only is it being operated by our newest long-haul aircraft, the Boeing 787 Dreamliner.”

Islamabad is one of four long-haul routes being launched by British Airways in 2019, its centenary year. The airline is also launching direct flights to Pittsburgh and Charleston in the US and Osaka in Japan, alongside several short-haul routes.

British Airways long-haul flights include complimentary food and drink, online check-in and free seat selection 24 hours prior to departure. The airline is amid a £4.5 billion investment for customers, including the installation of the best quality WiFi and power in every seat, fitting 128 long-haul aircraft with new interiors and taking delivery of 72 new aircraft. Next year, the airline will launch its new business class seat with direct aisle access.

The flights were suspended in September 2008 after the attack on Marriot hotel in Islamabad. The attack, which happened on Saturday 20 September 2008, killed more than 53 people and injured around 250, including six Britons. British Airways at that time normally operated six flights a week between London and Islamabad, the Pakistani capital. The main champions for this achievement are British High Commissioner Thomas Drew, Mr Ibn Abass ex Pakistan High Commissioner to the UK, Asim Suleman former DG CAA. And the most important of all the PMLN Government and Mian Nawaz Sharif who exerted full pressure to complete the Islamabad airport & worked hard to get international airlines back.