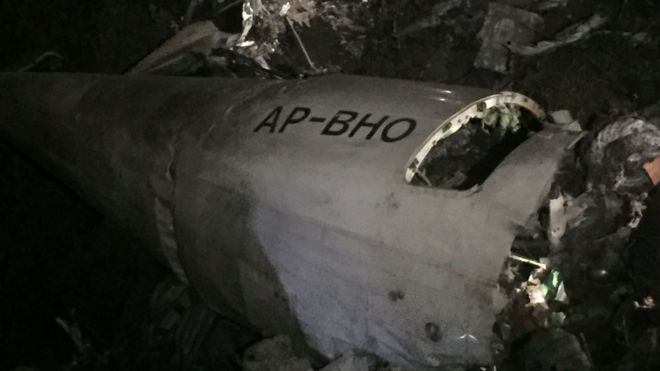 Geo news aired a report by one of its prominent aviation reporter Tariq Abul Hassan and some trivial claims were made in the report that not just defy aviation science but common sense. In the cue of report the Geo News presenter Rabia Anum reads out that following lines. And if you think we are writing this from some sort of fiction we have evidence of the repot right here on our facebook page that you can watch yourself.

The presenter goes on to say that “from the instruments taken out from the plane crash site shows some possible reasons of the crash. According to experts (God only knows who these so called experts are) one of the engines of the plane shut down due to fault, and the second engine started rotating in reverse (we are seriously not making this up) and instead of taking the plane forward it started pushing it backward. And due to one engine rotating in reverse it actually acted like brakes were applied to the plane. And the option to glide also ended (no explanation about it from the esteemed experts)”.

If it was in Pakistani Media's hand they would not hesitate to re invent the wheel & reverse newton's law of gravity.Watch this hilarious report about the #PK661 crash where the reporter claims "the propellers of ill fated plane started rotating in reverse & it started pushing the plane backwards."The moronic investigation doesn't stop here and the reporter claims that the affect on the plane was "like a brake has been applied mid air".These reporters should be given novel prize for science for imaginary thinking. If there was one.What a shame.#pakistanaviation #pia #pk661 #chitral #geo #mediaethics #ripjournslism

And then the reports mixes some cockpit recordings from various flights with music and some gadgets to lay out a fictitious report that defied common sense let alone any investigation. After reviewing the report its easily identifiable that gadgets shown in the report are not all ATR. At the end of the report the “prop hub in last shown is of Fokker Multan crash” and the may day call is from some other flight.

Secondly the worrying part is how such gauges and meters shown in the report got into the hands of Geo reporter? Why they are not in the custody of air crash investigators? On the site of crash one of our scribes have witnessed wide spread mis handling of vital data and evidence by journalists and rescuers.

We strongly believe that aviations regulators needs to learn important lessons from this crash specially in order to preserve the evidence. We have seen time and again from Airblue crash to Bhoja crash that there is no security at the site of crash and even after the military of police reach the site they do not try to protect the site and thus important evidence is lost. But that could only be done by a serious regulator whose job is not to facilitate airlines and airports but to regulate the industry. In the current CAA this seems to be too much to ask.

Another hit job on PIA premier by ARY news
Comment