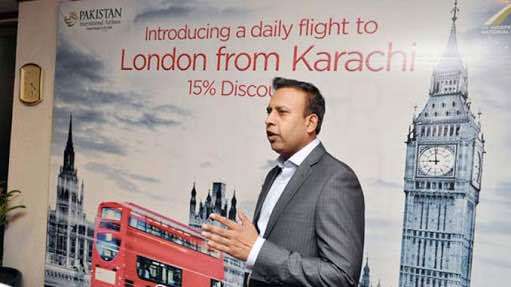 PIA has adopted new travel model for passengers travelling from Karachi to London. After seeing the recent advertisements by PIA on social media and radio, you get an impression that PIA is operating daily flights from Karachi to London Heathrow. There was even a ceremony where the acting CEO Nayyar Hayat unveiled a board. Advertising had been done in such a way to give the impression that PIA was flying direct from Karachi when in reality, PIA was giving daily connections via Lahore (PK757/758) and via Islamabad (PK785/786). And this is not as simple as it seems on the surface.

The conventional model for these flights call for ANF (anti-narcotics force), immigration and customs being performed at the last point of embarkation and entry done at first point of disembarkation. This means if a person is flying from Karachi to London via Lahore, he has to have his immigration done in Lahore and if they’re returning from London to Karachi via Lahore, their entry will be done in Lahore as well.

The new model adopted by PIA for these Karachi to London flights calls for all the procedures for an international flight to be done at the first point of embarkation and entry be done at the last point of disembarkation. This means that a person can buy a ticket for PK785 that leaves Islamabad for London Heathrow and travel from Karachi as an international passenger obtaining 2 boarding cards that is for the sector Karachi-Islamabad and then Islamabad-London Heathrow. Although this might seem very convenient, the person that boards the flight from Karachi isn’t actually boarding the aircraft, in this case a Boeing 777, or flight number for London Heathrow (PK785), instead he’ll probably be boarding an A320 that is destined for Islamabad (best connection time is available lets say on PK300) travelling with all the domestic passengers and be directed to the international departure lounge on arrival, by-passing all the ANF, immigration and custom checks, directly boarding the aircraft.

People might confuse it with the model of other flights such as PK711 Karachi New York via Lahore and Manchester or PK781 Karachi to Toronto via Islamabad. In this case, the flight is being operated as an international flight with an international call sign and the same aircraft being operated to the final destination. Special permissions have been obtained from FIA, USA’s TSA and Canada’s CBSA. In the London Heathrow flights model, no formal approvals or permissions have been attained from FIA or the UK border force.

Although it looks harmless and is financially beneficial for PIA, the risks involved here are very high. Recently, PIA’s aircraft have been subject to scrutiny with many cases of drugs being found onboard and passengers withheld by forces due to carrying contraband items. It is easy to see how passengers can swap boarding cards and exchange items onboard with a domestic passenger who hasn’t undergone the same amount of scrutiny that an international passenger has.

Unfortunately, PIA is not keen to solve this problem and exposing itself to further risks as it is introducing this very same model for its Kuala Lumpur flights. Flights from Lahore, Islamabad and Peshawar are set to end with all flights originating from Karachi. But what’s even more alarming is the passengers will be travelling on domestic flights with domestic call sign but how will immigration clear them for international travel on a domestic flight like PK301 (ISB-KHI), PK303 (LHE-KHI), PK351 (PEW-KHI)? This model is very convenient for smugglers as they can escape in Karachi and leave through the domestic terminal as a domestic passenger without subject to custom or immigration checks or hand over smuggled goods to a decoy who has joined as a domestic traveller on the domestic flight who won’t be subjected to any checks on arrival. Flights are starting from 1st July.

It is only inevitable that we hear about an incident waiting to happen. PIA has been scrutinised before but unwilling to learn from their mistakes and one more such incident could land a ban for PIA to enter the EU and reflect very very badly on PIA.